💪 Shopify’s Coming For You Bezos 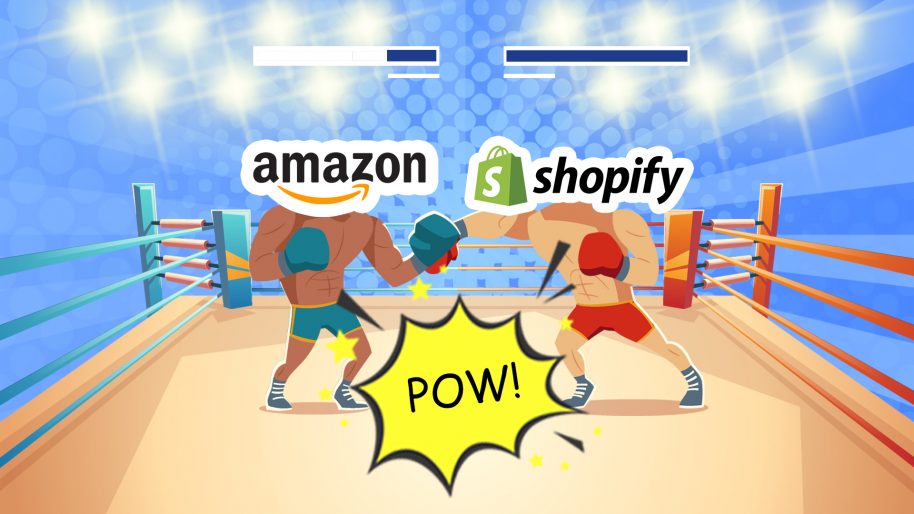 Shopify, the company behind Kylie Jenner, Allbirds and countless Youtube dropshipping gurus now has its sights set on Amazon.

The sale was about to set records.

It was perhaps “the biggest drop sale in the history of the internet.”

Given their combined 40 million-plus subscribers on Youtube and 50 million more on other social media, the duo promoted their makeup with nearly five hours of videos.

The massive flash sale temporarily broke Shopify Plus (their division for large merchants).

Loren Padelford, head of Shopify Plus, called it “a perfect storm of pressure”.

Despite Shopify’s massive infrastructure and them boasting over 1 million merchants around the globe, Jeffree Star said that the incredible demand:

“broke the front end, it broke the back end, everything is f#$%^d”

Padelford said “there were more people on their website, that one single website, the moment that product dropped, then there were on Amazon at the same time. It was the biggest drop sale in the history of the internet, as far as we can tell.”

The stars claimed to have sold 1 million palettes that day alone.

Padelford says he’s “excited and terrified” of the scale some of these people building to, afraid “they’re going to break the internet”.

Last year Shopify announced plans to invest $1 billion over five years on warehouse space and robotics to build out a fulfilment network.

Paddelford and other execs will tell you Shopify is “arming the rebels” and going after Amazon.

With Amazon’s $64 billion spent on logistics and shipping alone in 2019, is Shopify making one big gamble?

Are they truly ready to tackle the big bad bully?

[SPONSORED] Accelerate your conversions and increase your revenue with lemonads

Are you a media buyer, webmaster, e-mailer, or blogger and looking for profitable offers for your audience? lemonads affiliate program is the guarantee of thousands of conversions by providing you with offers that fit your traffic the best!

But since we all know that numbers talk, let’s checkout this case study, provided by one of lemonads affiliates.

Thanks to our account manager for highly recommending to us this offer. It performed very well with a payout of 28€! The information given by the AM was confirmed by the analysis performed on SimilarWeb as well as with the spy tool Adplexity, whose effectiveness is well established.

Native format is the most common for this type of nutra offers. As such, we have chosen Adcash which still has quality native traffic. We fully trust them.

We targeted both mobile and desktop traffic. The isp of one and the other was provided to us by Voluum tracker whose use was essential for the optimization of this campaign. We passed conversion info through Voluum to our sources, to refine targeting and therefore optimize our bidding:

We had a lot to test: the creatives, our Landing Page, the locations and the offer itself.

Thus, even with a lower CTR, the creative 1 remains the best in terms of revenue for 1.000 displays. Our funnel is refined, let’s make money!

The locations leaving the learning campaign were either stopped or its joined one of the three campaigns. After 14 days of running, we generated 2 283€ net profit, thank you lemonads!

If you also want to expand your business, join lemonads!
85% of our publishers reported an in increase in their revenues, within the first 3 months of using lemonads!

😱 [Leaked] Avast Subsidiary Sells “Every search. Every click. Every buy. On every site.”

Avast Antivirus, a program used by hundreds of millions of people has been found to sell highly sensitive web browsing data to some of the world’s biggest companies, including Home Depot, Google, Microsoft, Pepsi and McKinsey.

A joint investigation by Motherboard and PCMag relied on “leaked user data, contracts and other company documents” to expose the secretive market.

Jumpshot, an Avast subsidiary, boasts with data from over 100 million devices, while Avast claims to have more than 435 million active users per month.

Avast collects the data and provides it to Jumpshot, who in turn, repackage it into different products that are then sold to some of the largest companies in the world.

Some company names include the likes of: “Google, Yelp, Microsoft, McKinsey, Pepsi, Home Depot, Condé Nast, Intuit, and many others.”

Reports state some clients paid millions of dollars for so-called “All Clicks Feed” which track user movement across websites in highly precise detail.

“I was not aware of this,” Keith, a user of the free Avast antivirus product who only provided their first name, told Motherboard. “That sounds scary. I usually say no to data tracking,” they said, adding that they haven’t yet seen the new opt-in pop-up from Avast.”

>> The rabbit hole goes even deeper, check out the full piece, click here <<

AMAZON – Amazon to ramp up reporting of counterfeit goods sold on their website to law enforcement. 🚔— Read more

U MAD? – How does cathartic anger management on Twitter? Let it all out. 😡 — Read more

SHOWERTHOUGHTS – “You go to math class in school so that you can unlock different buttons on your calculator” / u/jawa24
Source: Reddit

[FEATURED STM THREAD] Need Some Landing Pages? Get Them For FREE at STM.

Did you know that we now have a “Landing Page Depository” section over at the STM Forum? We started it about 2 months ago, in an effort to make the life of our newbie members a bit easier. Setting up the first LP can be a challenging task, so we just wanted to help you guys out.

There is already a couple dozens of “cleaned” LPs available for download in .zip format. Just grab the ones you like, make some edits, upload them to your hosting… and you’re ready to launch your first campaign.

All of the LPs were chosen based on the data from the best spytool out there: Adplexity, which assures there are some top performers in the mix.

We cover a variety of verticals: the majority would be sweeps landers, but there is also dating, crypto, insurance, pin submits, forex, gambling and even some LP’s used to collect PUSH subscribers.

How’s that for a free bonus for our members?

One less excuse for delaying the launch of your first campaign 🙂