[Newsletter] Gold Mine??Adspend to hit $1 BILLION by 2021 on this underused platform. ? Facebook scandal exposed on Netflix

GOLD MINE? ADSPEND TO HIT $1B BY 2021 ON THIS UNDERSTATED PLATFORM! 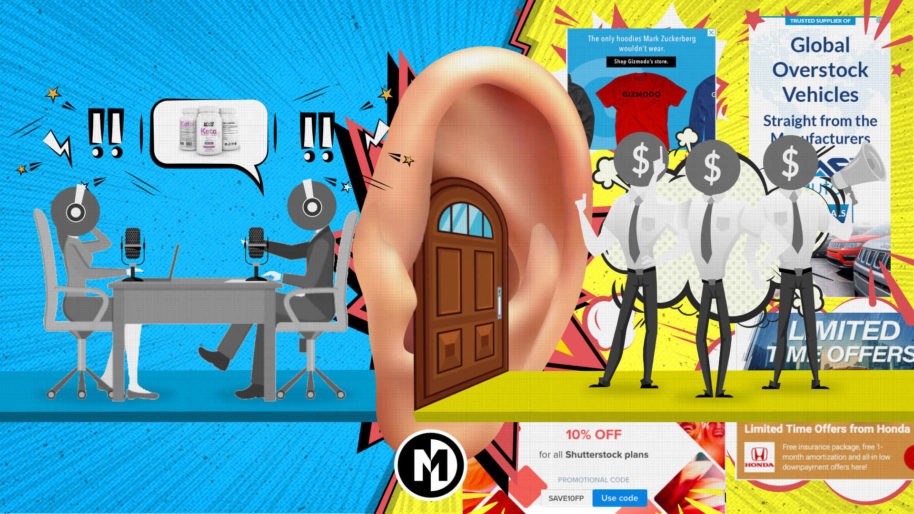 Wondering what we are talking about? Podcast advertising! No doubt you tune in to some from time to time, but do you realize how much podcast hosts make per episode?

According to a report by the Interactive Advertising Bureau (IAB), marketers spent more than $479 million on podcast advertising in 2018 in the US alone. Podcast ad revenues are growing like MAD, year after year.

Check out these figures to see how the market has exploded since 2015:

We know these are just forecasts, but the past growth has insane and there are no signs of it slowing down. One way or another, podcast are arguably one of the fastest growing categories within digital audio, and the ad spend growth only reinforces this fact.

But why should you care, when you’re not hosting podcasts yourself? The advertisers who’re fueling this particular ad industry are certainly not doing this as a form of charity. They are making money and that’s what all of us MRKTRS are after, right? It might be the right time to make podcast advertising a part of your marketing strategy.

Wondering how effective podcast advertising actually is? According to a recent report from eMarketer (link below), podcast listeners are highly engaged with the content of the podcast. Majority of the listeners are consuming several podcasts weekly, more than 50% of them tune in 4 or more times a week.

So even though podcast listeners “only” account for about 23% of the US population (for now), those who get hooked in, become fans quickly and they closely follow their favorite hosts. Podcast hosts are pretty much influencers, but not the same type as all the Instagram models who grow their audience by exposing their curvy bodies…

The good thing here is that the listeners don’t just randomly tune in and out to check another suggestive image, they follow their favorite speakers/hosts and literally want to listen to what they have to say.

Does it start to make sense now? All it takes is for the host to recommend something to their audience and sales start flowing in. The personal touch is EXTREMELY important here. And the advertisers do realize this! As much as 63% of all podcast ads are actually read by the host! No celebrity voice reading some pre-written text, as we know from the radio. The more natural it sounds, the better.

Podcast advertising is a largely untapped world for the affiliate crowd, so far it’s the playground of direct response advertisers/retailers, financial services, B2B, arts, telco and entertainment industries. It might be about time for us MRKTRS to finally give this a try too, agree?

NEURALINKED – “A monkey has been able to control a computer with its brain.” Elon Musk’s Neuralink revealed how they plan to connect human minds to your iPhone ? — Read more

FIX – For those digital nomads that suffer from SCS (sh*t coffee syndrome) in foreign cafes, make your own on the move with one of these 5 portable espresso makers. ☕ — Read more

STARTUP – Here’s a look into Facebook’s wild early days, featuring an oral history from key players and other notable names during the critical months of 2004 and 2005.? — Read more

WARNING! – Instagram have removed the likes and views counter for posts in over 6 countries ⚠️— Read more
AND they will warn you now before banning your account ⚠️ — Read more

VISIONARY –  Are IBM onto something here? They’ve just been awarded a patent for a watch-mounted screen that unfolds into an 8-panel tablet ?️— Read more

STRATEGY –  Dim Niko understands the importance of customer lifetime value, and argues you don’t need to profit from FB ads. Just use them to fuel the fire of your ecommerce empire ? — Read strategy

SHOWERTHOUGHTS – “After popcorn was discovered, there must have been a lot of random seeds that were roasted to see if it would have the same effect” u/hooligan1388

“Last year data surpassed oil in value. Making it the most valuable asset on earth.”

Social media data and privacy has flooded mainstream news over the last 12-18 months since the Cambridge Analytica scandal.

The upcoming The Great Hack documentary will only add further fuel to fire and paint facebook ads in a very, very bad light.

Ironically, Netflix will be suggesting this film based on our past viewing data when it drops next week on July 24th.

TGH focuses heavily on Facebook & Cambridge Analytica (the political consulting firm that mined data for helping Trump gain US presidency and Brexit defy the odds in the UK).

It dives into the secret sauce that made it all possible. Data harvesting at massive scale, the targeting, the fake news. A truly mind-boggling strategy that would make any digital marketer proud… If it didn’t have such a profound effect on the political landscape in the US & Europe.

What this means: a lot of deleted Facebook accounts. And a spike in ad blocker installs.

Let’s just hope the documentary doesn’t reveal Instagram and Whatsapp are owned by Facebook too. Heaven forbid what will happen then….

FEATURED STM THREAD:WHAT’S THE BARE MINIMUM YOU NEED TO START IN ADULT?

Considering starting running adult traffic? Why not, there’s a lot of money being made with this particular traffic type, day after day. But do you know what’s the basic setup you need to put together in order to even stand a chance?

Matuloo just posted a detailed thread dealing with just this topic. It’s all in there: what tools you need, how much they cost, where to get them and how many you can choose from.

This is the first of many more lessons to come, all about adult traffic and how to deal with it in order to reach profits. You can check a short preview by clicking the link below: